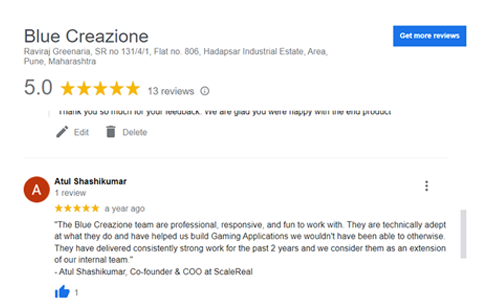 “The Blue Creazione team are professional, responsive, and fun to work with. They are technically adept at what they do and have helped us build Gaming Applications we wouldn’t have been able to otherwise. They have delivered consistently strong work for the past 2 years and we consider them as an extension of our internal team.”
– Atul Shashikumar, Co-founder & COO at ScaleReal

“We were extremely satisfied with Blue Creazione, and especially Parini. Parini helped with our wedding Save the Dates – she was able to creatively turn our vision into reality and patiently address our comments while we were making up our minds. Thank you Parini! ”
– Trisha Mitra

” Very happy and satisfied with the animated card created and given shape to, as per our visualisation. ”
– Sarbani MITRA

“Your games have such cool graphics and the characters are great and the story it amazing its great for all age groups. ”
– AyrissaBindu S

” Have downloaded some games for my toddler and he loves it! Keep up the good work . ”
– Angana Chatterjee

” Connected with Parini to develop an animation which needed creating characters from scratch. She did a great job and didn’t mind iterating multiple times till a reasonably good video was ready. ”
– Nilesh Agrawal, Moneyable Educare LLP 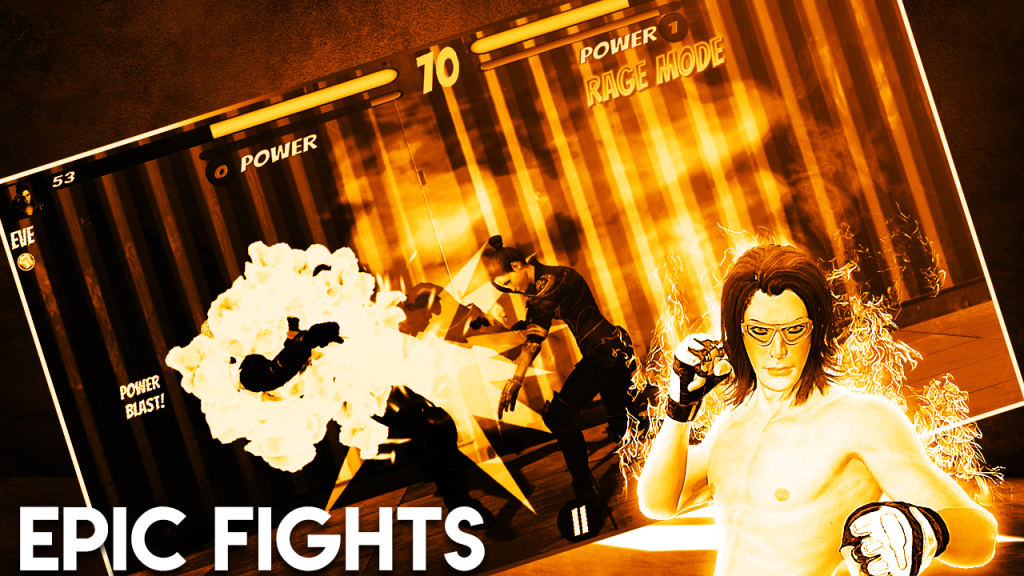 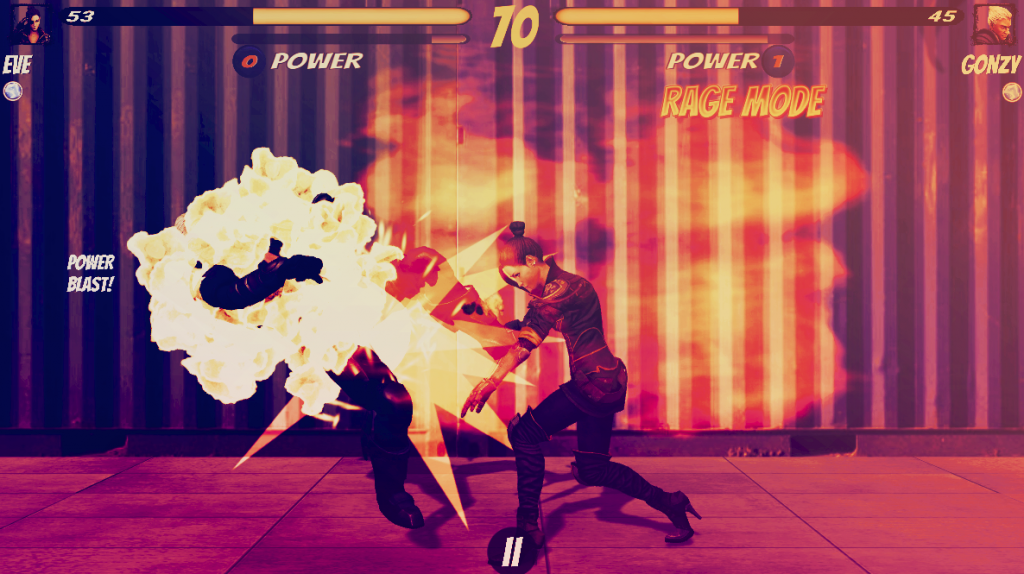 Our very much loved multiplayer fight game was recently reviewed on gamekeys.net
The game is Full of action, with each character carrying unique fighting style and powers
We keep updating the game with new characters on our players requests.
You can play the game here on IOS, Android.

“For a mobile game this felt perfect. Although never quite felt like a mobile game while playing. It simply is amazing.” – Inquest.

When I first saw this game on Apple Event. It felt like just another endless runner. And honestly never really thought of playing it on my iPhone. But as Apple launched the new Apple Arcade. There were bunch of many games which looked great and made more sense than this ‘bit’. However looking at the preview video of Sayonara Wild Hearts, I felt like giving it a try just this one time for one day.

And so “the story begins” from the very first narration in the game I found myself in a whole new world of endless AWww! The game just took off and never stopped until I completed the first Level! The game didn’t even stop for loading. Also when the level completed it felt like Game was resting more than me! As literally my phone was on fire! Literally the performance(phone) was sweating to keep up with the beauty/graphics of the game.

Game and the music felt like they were made for each other. And on the other hand I am sure who ever was playing the game was having super fun.
Although I ranked Bronze and Silver On every level, I just wanted to see what the game had for me next. And never did I ever skipped the “bit”. Well the game will keep asking you if you wanted to skip the level “bit”. Truth be said I did do it the first time and then I super regretted it! And never did that again till the very end.

Levels in this game are really fun and complete. The game has 2d, 3d, 2.5d gameplays through out various levels. Which keeps this game very much connected to the players. The story narration also feels great till the very end. Mostly you will be filled with awesome music of the game ringing in your head till you finish the game and beyond!!

Sayonara wild hearts could be 1 game making you buy that Apple Arcade subscription. Just check out this whole and soul perfect game.
The game is available on Apple Arcade, Nintendo Switch, PS4.

I have been Watching WWE since my childhood and after that playing WWE game on PS4 is such a wonderful experience and it recalls all my childhood memories with WWE and all the WWE superstars.

Playing WWE 2k19 is like you are watching a WWE on Television, in other words this game is so realistic and Simulation of WWE superstars are awesome.

The main highlight of 2k19 is the career mode in which the story begins with the selection of wrestler in WWE, till he/she becomes WWE champion. and all the locker room discussions between wrestlers and the backstage fights are the new showcase and main highlights of 2k19.

As compared to 2k18,improvement in 2k19 is more and game become more realistic but 2k19 still has some issue like identifying the wrestler in gameplay mode and direction of wrestlers won’t change while playing and game hangs more while playing Royal rumble match , ladder match. Also sometimes camera angle during gameplay is struck.

But still WWE 2k19 is the best game so far and i hope bugs and issues while playing 2k19 will be resolve in the next edition of WWE game.i.e 2k20 which is recently released.